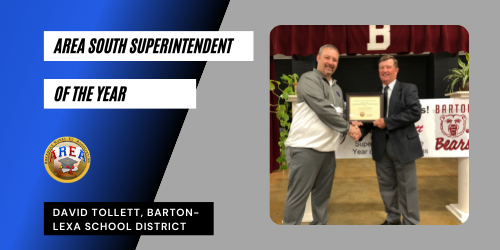 AREA selects two Superintendents of the Year, one north of I-40 and one south of I-40.  The process involves each coop selecting one nominee from their member districts.  Those 15 applications are reviewed by a selection committee made up of AREA Board Members using a rubric similar to the one used by AASA.  This year's winners are, North - Kelvin Hudson of Flippin and, South - David Tollett of Barton-Lexa.

David Tollett, Barton-Lexa Superintendent representing Great Rivers Coop, Richard Atwell Director.  Mr. Tollett, coming from a middle class family, learned early that public education was the hope, dream, and inspiration to do something with his life. David says after high school he went to college to become a corporate lawyer, but through a series of events God led him back to his roots of public education where many family members worked.  Believing that public education is the great equalizer for any student who desires to “make something of themselves” David has dedicated his life to helping others achieve their dreams.

During the past six years, while leading the Barton-Lexa Schools as their superintendent, they have developed a system for learning, technical opportunities, and college enhancement for the low socio-economic and minority students of the Arkansas delta.  They have obtained 13 OEP awards and have served more students obtaining pathways to their dream.  As a former administrator in western Arkansas, David realized that Arkansas delta students do not have the same opportunities as the students in western Arkansas.  He and his team have worked tirelessly to bridge that gap.

Mr. Tollett has been elected to the Arkansas House of Representatives from District 12.  Knowing that public education has been under attack nationally in favor of for profit private schools, David worked diligently to prevent Arkansas from diverting public money to support private schools.  Through his efforts, a major voucher bill was defeated on the House floor.  His testimony against vouchers pointed out their ineffectiveness educationally, their support of segregation and discrimination, and that the primary reason for vouchers is to provide tax breaks for wealthy individuals and corporations.

Mr. Tollett has made great advancements in the Barton-Lexa School District regarding facilities and educational opportunities for students.  He has worked tirelessly for all Arkansas students as a legislator.  He is a credit to the profession in every way, and AREA is honored to have him as their South Superintendent of the Year!