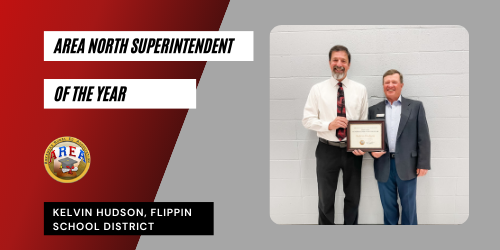 AREA selects two Superintendents of the Year, one north of I-40 and one south of I-40.  The process involves each coop selecting one nominee from their member districts.  Those 15 applications are reviewed by a selection committee made up of AREA Board Members using a rubric similar to the one used by AASA.  This year's winners are, North - Kelvin Hudson of Flippin and, South - David Tollett of Barton-Lexa.

Mr. Hudson’s favorite educational quote comes from Henry Adams, “A teacher affects eternity, he can never tell where his influence stops.”  Kelvin credits his parents, teachers and colleagues for a lifetime of proper guidance, influence and encouragement.

He states his greatest educational contribution and challenge is returning home to Flippin to lead the District.  Kelvin feels an obligation to his community to create a sense of belonging for students, staff and the people of Flippin.  This he has done very successfully due to lifelong relationships with students, stakeholders and peers.  “My daily prayer is that I’ve made the community of Flippin a better place from my position of influence.”

Under Mr. Hudson’s leadership, a new elementary school has been completed, ball fields constructed and teacher salaries increased.  ADM has grown as well as academic achievement all while ensuring fiscal responsibility and security.

Mr. Hudson is actively involved in his church, community, professional organizations, and politics.  He chooses to lead a Rural school because he cherishes the relationships and feels he can make a greater impact on students by knowing them and not allowing any student to fall between the cracks.  All this he does with love, caring and integrity.  Kelvin is truly a leader by action and example.   AREA is proud and honored to have Mr. Hudson as their North Superintendent of the Year.